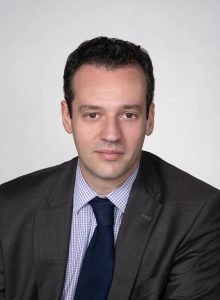 In the regulatory area he has extensive experience in the energy sector. He has represented firms before the Greek Regulatory Agency for Energy and delivered legal opinions on various regulatory issues of the Greek Energy Law. He also has had a pivotal role in recent milestone litigation for the electricity market. He is also a Member of the Board of the Hellenic Association of Energy Law.

In the same area he regularly delivers opinions for the Greek Regulatory Authority for Ports especially concentrating on competition law issues.

In the transactional area his experience includes corporate bond issuance’s and syndicated loans as well as special finance contracts with a focus on project finance. He has also negotiated finance contracts of Greek entities with the European Investment Bank where English law applied.

In the period 2009-2011 Dr. Kitsakis worked as an advisor at the European Parliament, where he worked on the overhaul of the European Banking Supervision system leading to a series of European Regulations and Directives in 2010. In 2011 he acted as the Head of Cabinet to the Minister of Foreign Affairs at the time, participating inter alia at the UN General Assembly. These specific professional experiences gave him a deep perspective into both international organizations and negotiations.

He studied law at the Law Faculty of Regensburg in Bavaria/Germany. He was awarded a PhD degree from the Leibniz University of Hanover, located in Lower Saxony/Germany, where he taught English Contract and Tort Law, European Competition and Internal Market law as well as Private International law.

He is the author of numerous publications on corporate finance, energy and contract law.